TEMPE, Ariz. — Nearly a week into their most recent therapeutic reunion, Michael Phelps and Grant Hackett, two giants of Olympic swimming, sat down to breakfast at a packed restaurant and wondered how they would explain themselves to their children someday.

The conversations they foresaw had nothing to do with Phelps’s record-shattering medal haul or with Hackett’s defiance of debilitating illnesses during a decade-long dominance of the 1,500-meter freestyle, the most grueling event in the pool, that earned him the nickname Captain Courageous from his fellow Australians.

They were reliving dark moments, times when they posed a danger to themselves and others.

Phelps, 32, imagined the day when his toddler son, Boomer, would refer to one of those low points: “You were going 86 miles an hour in a 45-mile zone. Why can’t I?”

Hackett, 37, laughed ruefully and told Phelps he had already spoken with a child psychologist about how to guide his 8-year-old twins through the shambles of his post-swimming life.

“There will be conversations that need to be had,” Hackett said, “and a certain strength you’ll have to find.” 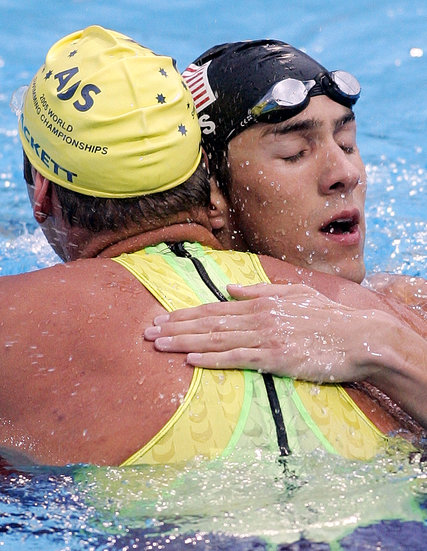 Hackett, left, and Phelps after they raced in the 200-meter freestyle at the 2005 World Aquatics Championships. Phelps won the gold medal, Hackett the silver. CreditMark J. Terrill/Associated Press

After the second D.U.I. arrest, in 2014, Phelps spent eight weeks at the Meadows, an Arizona treatment center, to deal with the anxiety and depression that he had tried to overcome on his own after the 2004, 2008 and 2012 Olympics. Recognizing how difficult it is for many people to recognize their vulnerabilities and reach out for help, Phelps has devoted himself to unraveling the stigma of mental illness.

“I want to be able to get out in public and talk and say, ‘Yes, I’ve done these great things in the pool, but I’m also a human,’ ” Phelps said, sweeping his gaze across the restaurant. “I’m going through the same struggles as a lot of the people in this room.”

Phelps has started some public speaking on the topic and has become an informal counselor to the stars, lending an ear to the golfer Tiger Woods after his arrest in May on charges of driving under the influence. A toxicology report revealed no alcohol in Woods’s system, but rather a mix of four prescription drugs and the active ingredient in marijuana.

“I feel like that’s a massive scream for help,” Phelps said.

Sometimes at night, Hackett and Phelps will start talking about mental health — their own and others’ — and the conversation will still be going strong at 1 or 2 in the morning. The more they give voice to their vulnerabilities, the easier it is to imagine one day explaining their worst moments to their children.

Yes, they messed up, but nobody is perfect.

“It doesn’t matter whether you’re Tiger Woods or Joe Blow down the street,” Hackett said. “We’re all just people trying to work through stuff.”

There is a lot more to this story….READ THE FULL STORY HERE.