I was in a group recently and one of the fellows was upset that he wasn’t successful.

After talking with him for some period of time the group realized that his definition of success meant earning more money that his mother did.

Now, just accepting his premise that success was defined by money, we knew he was going to have a tough road to go down. Has he told us, his mother was a very successful entrepreneur. She earned enough money to put her far into the 1%. She had pictures of her with Warren Buffett, and investor in her company.

This got us started on quite a lively discussion about not only what success was, but also what one should have as an ultimate goal.

This was an area in which I could speak at some length.

I had grappled with this problem for many years during the depths of my depression. In fact, it was one of the more defining aspects of my depression: my purpose in life. What, ultimately, is a reason for being here? And what and how should we live our lives?

In the end I was able to answer both questions for myself quite satisfactorily, however for this fellow he had some trouble. Ultimately I decided that the one thing that I wanted in life was to be happy.

Rich or poor, healthy or infirm, married or single, with children or without, I ultimately decided it didn’t matter which of those describe my life, as long as I was happy.

Once I decided that my goal was to be happy, I eased enormous amounts of pressure off of my shoulders – self-imposed pressure. As I will talk about later I grew up as a perfectionist. And for me, when the goal of life was to earn a lot of money, being at the top of the heap of money was the “perfect” way of doing that. Of course, life is not like that: what you wish for does not always come true. And, while I ended up making more money than I ever thought I would when I was in university…it still wasn’t enough…and it wasn’t happening fast enough. As such, I became depressed. When I reframed my goal in life to be that of happiness, I relieve myself of the inordinate pressure to be “perfect” and earn lots of money. That was a catalyst for change, and it allowed the depression to lift.

Now, that is not to say that money is not important for me. I enjoy earning money, and being able to spend it responsibly. But the importance of earning money, or lots of money, became merely one factor in the list of things, which contribute to my happiness.

Money provides autonomy, security and the time to enjoy life.

Autonomy, or “personal control” – is “…the belief that we’re in charge of our lives…[and it]…is much more closely associated with happiness than money is.”[1] Dr. O’Connor write further in his book that “although the wealthy are slightly more likely to feel they have person control, those on the bottom rungs of the economic ladder who feel they have greater personal control are much happier than those at the top without it”.[2]

Security can be the ability to be free of fear of loss of a job, or the fear that the bank may repossess your house if you can’t afford the mortgage, or you may be out on the street if you can’t afford the rent. However, increasing amounts of money only account for a certain amount of happiness derived from increased security. Research shows that increases in income up to about $75,000 a year are significant factors in one’s happiness.[3] However, beyond that amount, the return for each dollar earned is diminished. That is to say, the difference between earning $20,000 a year and barely being able to pay rent or buy food and earning $60,000 which may allow one to afford something other than a basement apartment and be reliant on food banks, is very significant: your security has increased. However the difference between earning $220,000 a year and $260,000 a year is not life changing.

Then, more money must allow us to have more time to enjoy life. If I have a lot of money, then I do not have to work, I can lounge around all day in my underwear and watch TV, yes? Well, yes, however, one of the difficulties with this is that the various media that we watch now can show us how well off the other parts of society are. When we did not have such ubiquitous media, all each of us would have been familiar with is our local corner of the world. In that area we could be “…the best hunter, the best knife-maker, the best baker, the best at finding berries. Now when we try to play baseball, we’re not comparing ourselves to the firehouse team from the next town; we’re comparing ourselves to steroid-enhanced freaks”.[4] Now, many of us feel that we have to earn ever more money in order to “keep up with the Joneses”, or with people on the far side of the planet. So the watching of TV (or viewing other sources of media) sometimes only flames the fire of desire – desire for more money, regardless of whether one has enough to just sit on ones ass and watch the TV. As such, while having lots of money may permit us to laze around and watch TV, perhaps that isn’t a wise choice of our life. So, what does having a lot of money do for us, if not to watch TV and laze around? Maybe having enough money is useful solely so that we don’t HAVE to work. Is the real point of having a lot of money merely to not have to work (because not working will make me happy). Surprisingly, NOT working is NOT the answer. However, that’s for another time.

Money provides one other intangible – a way to allow us to “measure” ourselves against other people. It is an easy marker to determine who is the most “successful”. I still suffer from this easy confabulation of success and money. True, if one is successful in business, sports or entertainment, money often follows (and often in large amounts). However, having a lot of money does not, in and of itself, mean that one is “successful” (just look at countless winners of the lottery). What is success, and why does it matter? I’ll get to that another time.

The idea of reframing this fellow’s view on his life was difficult for him to accept, but was something he found enlightening.

So, if money is not the route to happiness, how do we achieve “happiness”? Read on my friend, read on. 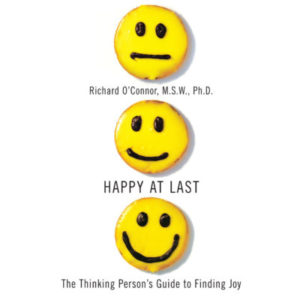